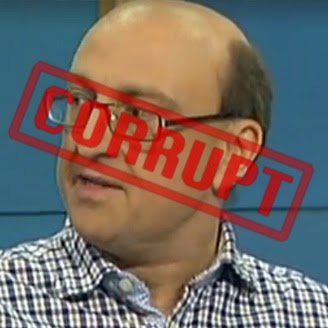 On Sunday, the political program Q+A had a panel discussing the Dirty Politics revelations that have by all accounts but their own badly derailed the National parties campaigning. What I found most surprising about this panel is that it included somebody implicated in the right wings underhanded attack politics, David Farrar.

Not only was David Farrar AKA Pinko to his "friends" on the show, he was allowed to bleat on for ages while other panellists were closed out of the discussion. The nervous little man tried his best to downplay his seedy role in National's black-ops team, saying that it was merely people sharing information and that other political parties do it all the time as well. Yeah right!

Being that National Minister's have been providing sensitive information to their pet attack bloggers in order to discredit the people they don't like, and that no other political party has ever been found to have acted similarly, there is no validity to such a patently disingenuous argument. In other words there are no excuses for such despicably undemocratic behaviour.

By trying to minimize the terrible truth, David Farrar et al are clasping at straws in the hope that New Zealanders aren't interested in what the government and their propagandists get up to. Seemingly aided by a biased media, they intend to try and sweep the Dirty Politics scandal under the rug without having properly answered any of the pressing questions Nicky Hager's book raises.

However, some things cannot be hidden or covered up, and instead need to be exposed for all to see. Here's one such excerpt from the source material that deserves further attention:

my email doesn't get read

i'd try [REDACTED] she is filthy

thats the plan, and i have carefully kept the balance of princesses to guys uneven


David Farrar, a trustee of the Free Speech Coalition, has tried his best to dismiss the 'Princess Party' as some sort of celebration of the Royals. In my opinion the discussion above shows that his weak defense is highly flawed. Clearly the sex party these National party propagandists set up was anything but innocent.

Old men organizing a party, then targeting and getting young woman drunk in order to have sex with them is clearly the activity of sexual deviants and such people should have no place within our political system.

The leaked communications between Cameron Slater and Simon Lusk are a pretty damn good reason not to have the repulsive David Farrar on our TV trying to defend his and the National parties dirty politics. His involvement in the 'Princess Party' is another good reason not to vote for National as well.
Jackal
‹
›
Home
View web version